I spent so much of August freezing and canning veggies from our garden and the farmers market. Three kinds of pickles – dill, bread and butter and chow chow, tomato sauce, and peach chutney. The peach preserves I made in July are still looking fine. I didn’t open them a month later like I said I would because we were still getting fresh peaches. I hadn’t thought of that. Into the freezer went tomatoes, peppers, okra and lots and lots of summer squash. 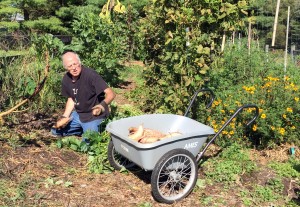 Here is Dave digging up sweet potatoes. We also harvested a load of butternut squash. So love both these veggies. I looked at our parsnips and see some of them pushing up from the soil. I think I’ll try one soon but I’ve read they are sweeter if you wait until they’ve been kissed by frost. That is probably a few weeks away and I don’t think I can wait that long. 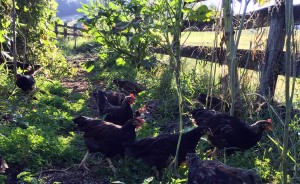 The chickens have been a major distraction. Dave built a coop in the barn. We moved them from the brooder in the mudroom to the coop when they were about 5 weeks old. About a week ago we started letting them out in the evening for a run around the garden. We wait until the evening so they go on their own back into the coop. It’s neat to see. At a certain amount of darkness they start making different sounds and one by one make their way into the coop. Right now we stay with them while they are outside the coop. Our main concern are the cats. Two of the three have come around and we chased them off. Waiting for the third to make investigations. We bring the dogs in with us and the chickens and so far that has gone well. The chickens aren’t full grown yet. I think that is a couple of months off. They are a heritage breed and they tend to be slow growers.