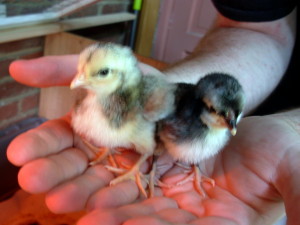 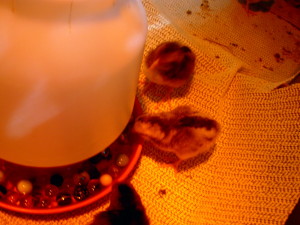 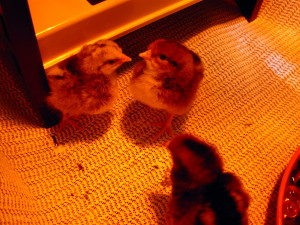 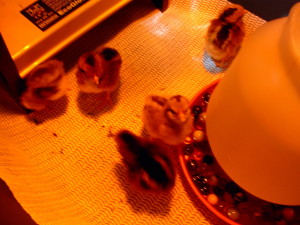 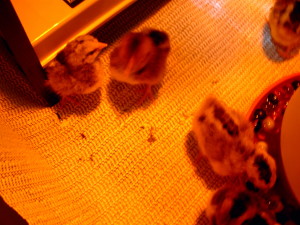 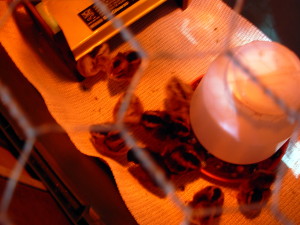 They are out in our mudroom – kind of a porch off the kitchen – in a brooder we made out of two dog crate halves. I think they will quickly out grow this. We keep running out to check on them. This afternoon they were eating and drinking like champs. This evening when I checked some of them were sleeping/resting. I had a brief moment of thinking they were dead and then noticed they were breathing and blinking their eyes. So cute! 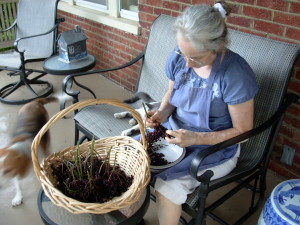 I learned how to make elderberry syrup in my Herbal Healing class. 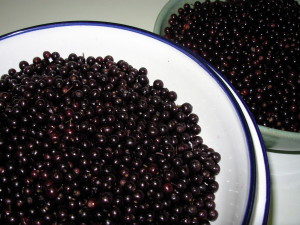 I used just a few cups for the syrup and dried the rest in the dehydrator.

I will start taking a teaspoon a day in the fall and double that if I feel I am coming down with something. 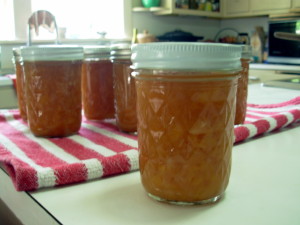 This is the first time I’ve made up a recipe for canning. I looked at some recipes for preserving peaches with honey and didn’t find exactly what I wanted. It tastes good and we’ll see if it really preserves by opening a jar once a month.

I’ll try to remember to update this post with the final results. This is what I did-

about 7 lbs. peaches (I used seconds so probably a little less than this because there were bad spots)

Peel, core and dice peaches into a heavy bottomed pot. Add lemon juice and salt. Bring to a boil. Simmer.

I occasionally stirred it to make sure the peaches weren’t sticking but I think by doing that I reduced the temp too often so next time I’ll try not stirring so often.

Recipes online said to cook it down until it thickens and by reading the comments I found people had trouble getting it to this point. So I’m not sure thickened is the correct word to use. I reduced it until there wasn’t so much liquid. How long it takes will depend on how juicy your peaches are.

Keep it at a boil while you fill 7 half pint jars. I processed mine 20 minutes because we are at high altitude.

I had an extra 2 cups which was a good thing. Dave is enjoying it on bread. I don’t think I could have stopped him from immediately opening one of the processed jars if I hadn’t had the extra. I expect it will last a couple weeks in the fridge.

The 7 half pint jars of preserves are sitting on my red cabinet in the kitchen so I remember to check them. Assuming they don’t go bad right away, I’ll open one a month for a test. If they look and smell okay, I’ll give it a taste and report back here.

I have some thoughts about tweaking the recipe if it fails. Would keeping the peel on provide some natural form of pectin? I saw recipes online for peach pit jelly. Might the pit provide pectin? Okay, I just googled – what does pectin do and here is what I found-

Pectin is a carbohydrate found mostly in the skin and core of raw fruit. In nature, it functions as the structural “cement” that helps hold cell walls together. In solution, pectin has the ability to form a mesh that traps liquid, sets as it cools, and, in the case of jam, cradles suspended pieces of fruit.

Obviously, I should have done more research before starting out. So success or not, I think next year I’ll leave the skin and pit in during cooking and then strain it. 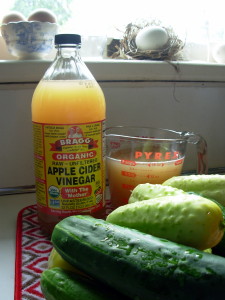 Canned my first dill pickles of the summer today. 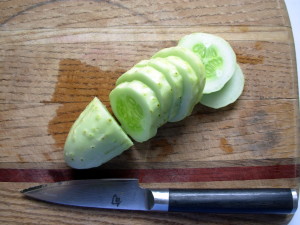 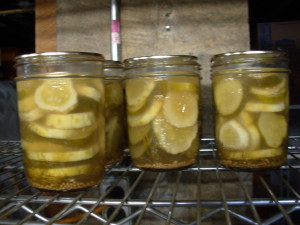 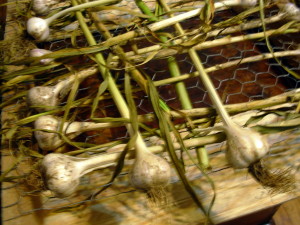 Damian made a drying rack for our garlic. 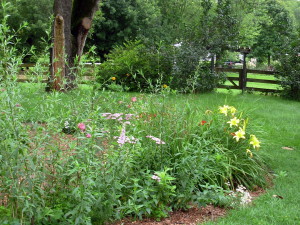 I love the combination of flower colors in this bed – pink yarrow, yellow and burnt orange day lilies and orange cosmos. 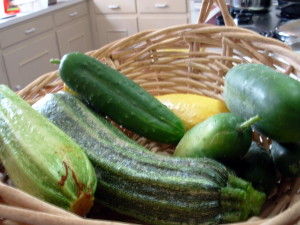 An abundance caused by too much rain. 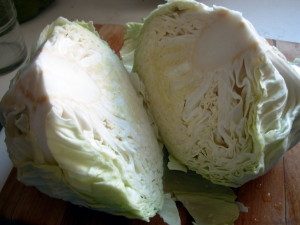 I used our last cabbage in a recipe I found in the 2014 Baker Creek Heirloom Seed catalog. Even though we didn’t wait the recommended 30 minutes for the flavors to meld, we each went back for seconds.

Traditional German coleslaw is not made with mayonnaise, but with a sweet-sour dressing. As a result, this will easily keep for a week or more in the refrigerator, and in fact gets better over time. The Amana Colonies in eastern Iowa were founded by a utopian Protestant sect in the middle 1800s. While they are best known today across the country for their microwave ovens, in Iowa they are also revered for their German food. This recipe is based on the version cooked over a half-century ago in their communal kitchens.

Remove the outer leaves of the cabbage, cut into quarters, remove the core and shred. Place shredded cabbage and onion into a large and sturday mixing bowl and add salt. Pound the cabbage, onion and salt with a wooden mallet (or potato masher) until the cabbage is limp.

Pour off any liquid that has wept out of the cabbage, onion, and salt mixture. (I did this in a large calendar and then returned the cabbage to the large bowl.) Add the vinegar/sugar/oil dressing and celery seed and mix thoroughly. Cover and allow the slaw to sit in the refrigerator for a least 30 minutes. The slaw will be even better if made a day ahead. 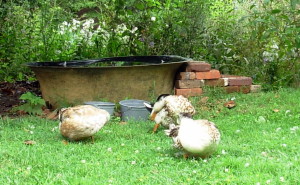 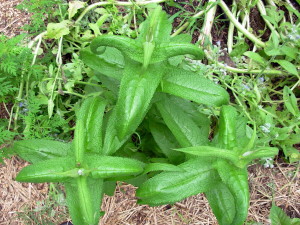 Based on what I learned in my Herbal Healing class this week, I thought this could be boneset. I posted it on a Plant Identification Facebook page and received confirmation that it is. The stem seems to grow through the leaves. 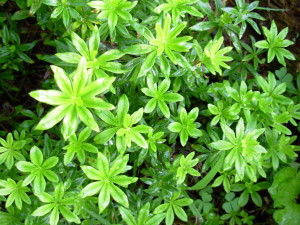 I used a book from the library to identify the above as sweet woodruff. It has pretty little white flowers in the spring. This grows by the stairs to the cottage. 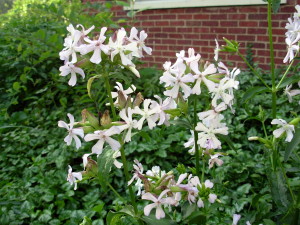 I used the same book to identify this as soapwort. 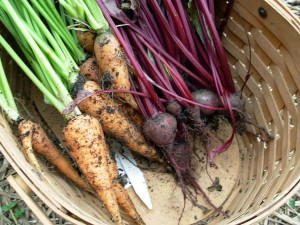 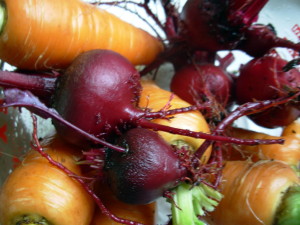 Added to a beef soup.

or bee balm. In my June 29th post I shared a mystery plant. It finally dawned on me last week that it’s another bergamot. I’m guessing a wild bee balm. Here is another photo. 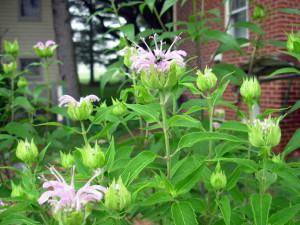 The blooming of this native bergamot I planted in the spring helped with the identification. 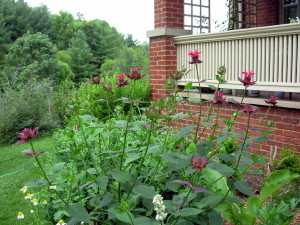 I bought this plant from the Virginia Native Plant Society. Love the deep pink. 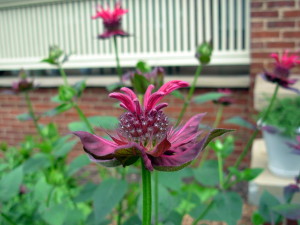 Little did I know I already had three other bee balms in my garden. Yes, three. I noticed this one last week to add to my collection. 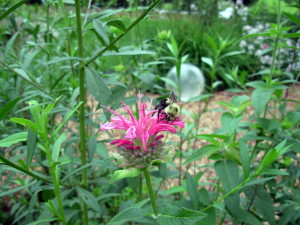 The red bee balm below was the first one I shared in a post back in June. 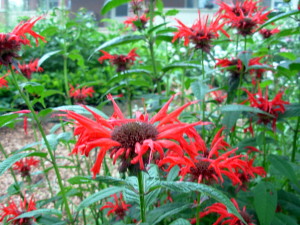 I clipped and dried some of the bee balm in the first photo yesterday. It has such a lovely scent.

I see now why they call it bee balm. 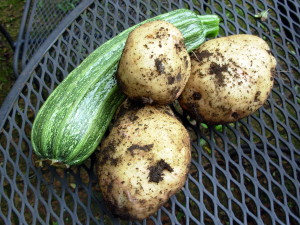 The beginnings of a Friday supper. Our first zucchini of the year (costata romanesco) and our first potatoes ever (yukon gold).

I diced the potatoes and was amazed at the crunch elicited as I cut. I simmered them in a little water and lard.  Toward the end of cooking I added some onion. The water evaporated as they cooked. I didn’t want to loose any nutrients by pouring cooking water down the drain. The potatoes cooked quickly so I added some butter and put a lid over them while everything else cooked. I sautéed the zucchini in lard and added basil before serving. I served the potatoes and zucchini with a local mild italian sausage. Delish!